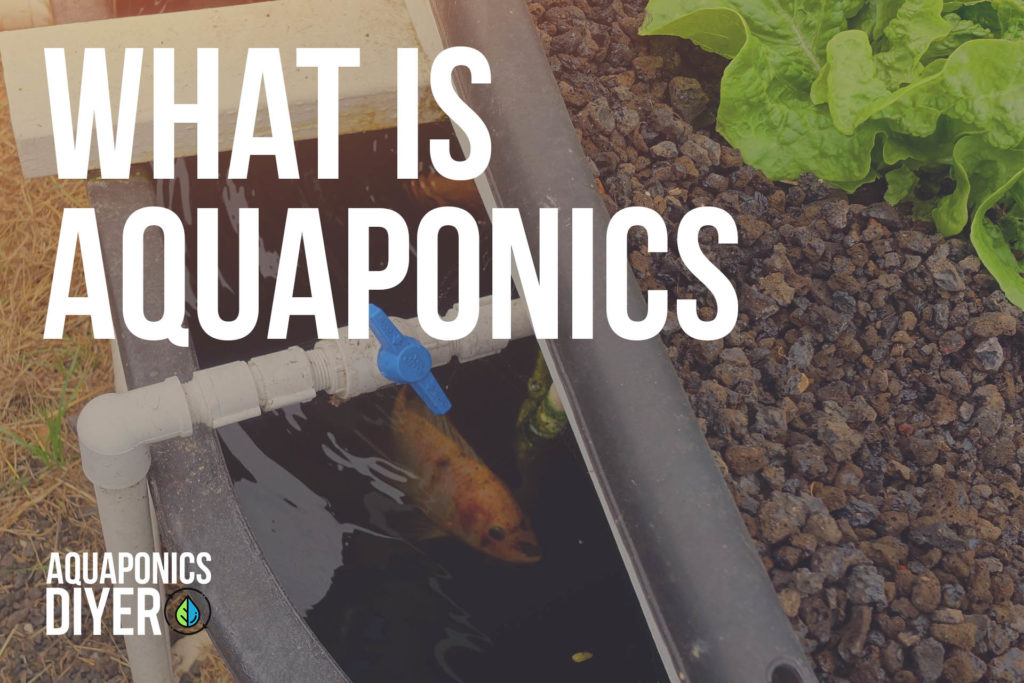 Due to its recent boom in popularity, many people were left wondering – what is aquaponics, exactly? Well if you’re one of those people, you’ve come to the right place as today we’ll not only fully answer the question but also introduce you to the essential aspects of this revolutionary gardening and farming system!

In short, it’s a fully sustainable and low-cost farming solution that ensures you always have fresh, nutritious and delicious food available by your side. By combining the very best parts of both hydroponics and aqua farming, it achieves something truly special – it’s unbelievably effective, extremely affordable or even profitable and super easy to maintain.

So, what is aquaponics all about? Let’s find out below!

Aquaponics is an agricultural production system that combines raising fish (aqua farming) and growing plants in soil-less conditions (hydroponics) to create a self-sustaining system in which the only thing you have to do is feed the fish, the rest happens automatically as if by magic. It uses the natural functions of both fish and plants to create a self-sustaining food production chain that is not only extremely easy to maintain but also incredibly effective and wonderful for the environment.

In a more academic sense, such as according to A Practical Guide for Aquaponics as an Alternative Enterprise, published by Richard Tyson and Eric Simonne, aquaponics is a viable, intensive and sustainable agricultural production solution suitable to produce crops with very low fertilizer and water inputs.

Now, I’ve been asked a thousand times – Frank, what is aquaponics and how does it work? Well without further ado, let’s dive deeper and clear both of these questions!

What is an Aquaponics System?

An Aquaponics system is any gardening or farming system that uses the concept explained above as its basis. This means that an aquaponics system always has two main parts – the fish tank and the grow bed – with the first being where the fish live and the second being where the plants grow. Now, they’ve got to interact with one another so they will always be interlinked in a way or another (there are 3 main ways to do this, as we’ll see further below in the article).

Regardless of how you set up an aquaponics system, it always follows the same general process which is:

You feed the fish, the fish’s waste then produces ammonium in the water which is transformed into nitrites and then nitrates by the naturally occurring bacteria. The nutritious nitrates present in the water are then absorbed by the plants, allowing them to grow fully and healthily while the plants also filter and clean the water itself, which is then dropped back down to the fish. This is the full aquaponics cycle, made possible by the wonders of the nitrogen cycle that we’ll see below.

How does Aquaponics Work?

The magic all happens due to the aquaponics nitrogen cycle. Take a look at it below: 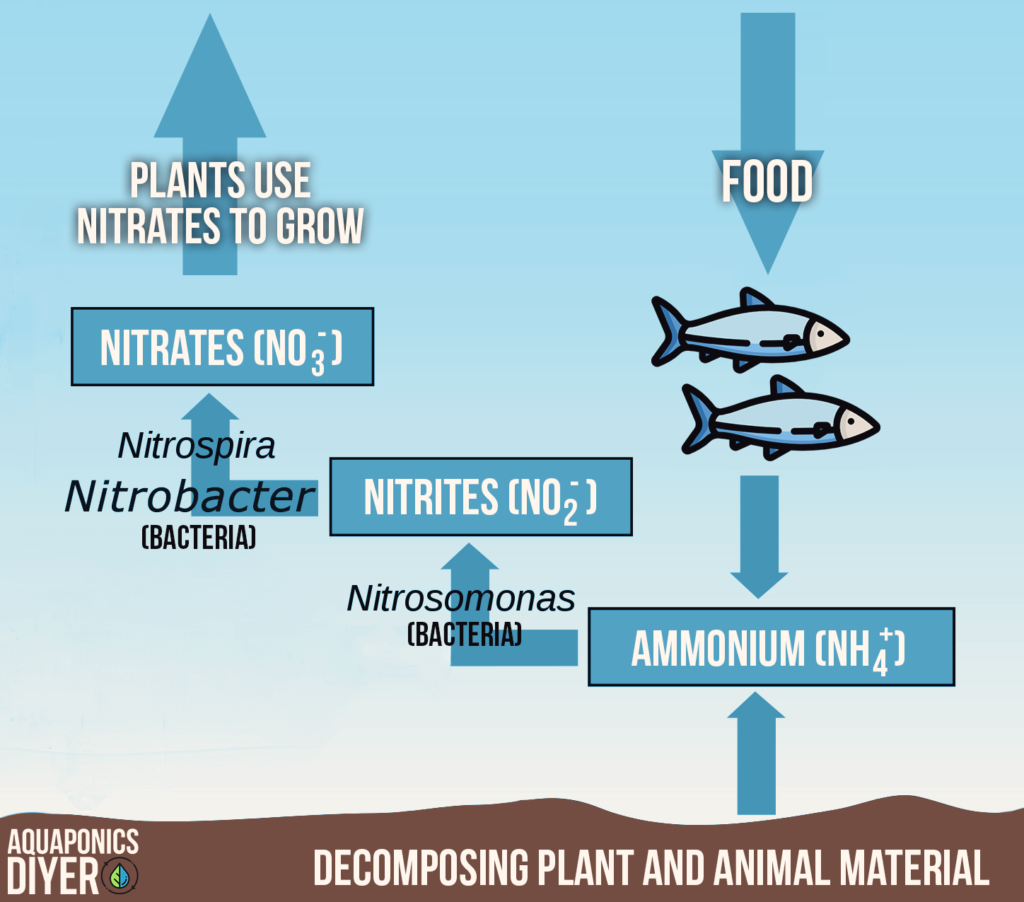 As explained previously, the only non-natural input here is feeding the fish – the rest happens automatically.

Now, there are several ways to put this cycle into practice. The most popular, widely used methods are Raft Systems, Media-Filled Systems and Nutrient Film Technique Systems. Their basis is all the same but they employ different components and strategies to achieve the same result.

While these methods share a few components such as soil-free grow beds and fish tanks, they differ through variables such as filtering components, type of growing beds, and the water flow and ventilation. Their objective is to successfully interlink the two main parts of any system – the fish and the plants – and that’s exactly what they do.

In a raft system, plants grow on polystyrene rafts which float on water, with the roots of the plants touching the fish tank’s water.

In a media filled system, plants are grown in beds of perlite, sand, gravel or clay pebbles which are flooded by the fish tank’s water through a pump.

The NFT system involves growing plants in narrow channels through which a thin film of water flows.

The best option for a DIY project is a media-filled aquaponics system due to the flexibility and ease of installation and maintenance.

What are the Components of an Aquaponics System?

Aquaponics systems include both mechanical and live components.

Let’s take a look at a brief outline of each component to provide you with a clear picture of the basic design of an aquaponics system.

Fish tanks are where the fish will grow, live and produce waste. They’re one of the main parts of any system and their size varies wildly according to the space you have available (with some being as small as 3 gallons, others as large as 30 and business ones going to hundreds). Choosing the right fish tank for an aquaponics system requires special consideration to guarantee a correlation with the plant grow beds. The fish tanks should be resistant, watertight, non-toxic and should be made from materials which don’t affect the ammonia and pH levels of the water. You should choose oval or round tanks to reduce the number of dead-zones and ensure continuous water and chemical flow.

The grow beds are vital to your aquaponics system because its where your plants are nurtured. You should start off with a 1:1 ratio between your grow beds and fish tanks and slowly progress towards a 2:1 ratio as it’ll increase the filtration levels of your system and provide long-term health to your fish. The grow beds should be solid enough to support grow media (sand, clay, gravel), water and plants.

In aquaponics, biofilters use biological components such as bacteria to convert toxic fish waste full of ammonia into nitrates to feed your system’s plants. The biofilter allows for higher densities of bacteria to develop which streamlines the mineralization process and produces more nutrients for the plants. You can choose to install either a horizontal or vertical filter into your aquaponics system.

The sump tank collects any water from your grow beds that doesn’t directly flow into the fish tanks. They’re usually positioned at the lowest level of your aquaponic system and use a pump to return water to the fish tanks when it reaches certain levels.

The settling basins filter out any left-over particles of fish food and other solids before the water flows into the hydroponics part of your system (the plants). After it’s been cleared, the water passes through your system’s biofilters.

The Live Components of an aquaponic system include bacteria, fish and plants. Occasionally you can also add worms to break down solids in a media-filled system.

The best plants to grow in your aquaponics system are leafy vegetables and herbs because of the low maintenance requirements although fruits can also be an excellent option if you have enough capacity and space for them. You can choose from a wide range of plants such as lettuce, spinach, coriander or lemongrass – to know which ones are perfect to use be sure to read our best plants for aquaponics article.

Before choosing what fish to include you should consider factors such as the region’s climate, the size of your fish tank and of course, if you want to eat the fish or not. Trout is a great choice for cooler regions, while Nile Tilapia are easy to rear in warmer climates although you can also install temperature regulating systems in order to successfully grow any fish regardless of your climate. The range of fish compatible with an aquaponics system also includes sunfish, koi, carp, crappie, bluegill and more – be sure to read our best fish for aquaponics article to see all.

Bacteria turn fish waste (ammonium) into healthy nitrates which are then consumed by the plants, allowing them to grow. Although bacteria are a vital part of your system, you should consider that not all types are beneficial. The ones you want to have are the Nitrifying and Heterotrophic bacteria (known as positive bacteria) because they minimize the toxicity levels of the water and control the development of the harmful type of bacteria.

As explained above, the beneficial bacteria found in the fish tanks breaks down all toxic fish waste and produce nitrites. The nitrites are transported through water flows to the growing beds and feed the plants. The filtered water then returns to the fish tanks. You can learn more about how an aquaponics system works by checking out this video:

Although aquaponics doesn’t entirely resolve the dual demands of continuous increase of global living standards and population growth, it offers amazing solutions to food production issues and if widely adopted, it could be of tremendous help.

Because both domestic and commercial aquaponics systems are based on soil-less plant growth, they don’t require the use of any petroleum-powered soil processing equipment. Also, as the system doesn’t include any weeds, there’s no need for pesticides or manual weed removal. As water and plant nutrients are an integral part of the system, you don’t require any artificial fertilizers or irrigation systems. This makes them not only healthy for you and the environment but also ensures that the produce looks, smells and tastes absolutely wonderful.

Because of their increased setup design flexibility, aquaponics systems can be installed anywhere you find a proper climate or can establish appropriate temperature conditions to facilitate plant growth and fish rearing. This way, aquaponics systems off-set any fertile soil requirements and aren’t even restrained by climate.

Traditional farming methods waste a large amount of water through irrigation and evaporation. However, aquaponics integrates a closed and recirculating water flow. The only water that leaves your system is the tiny quantity consumed by the plants.

These outstanding and revolutionary qualities are what’s leading to Aquaponics being promoted so much worldwide. You’ll find incentives not only by commercial enterprises focusing on providing healthier food products but also by university centers in an effort to educate the population about the benefits of such versatile food production systems. Take the following literature for example:

The University of Wisconsin-Stevens Point Aquaponics Center promotes this system as a sustainable alternative farming method. Through in-depth research, showcasing and technology transfer, the educational hub is continuously developing the application of aquaponics in the public and private sectors.

Let’s take a look at some other frequently asked questions that you, the readers, send me.

What is Aquaponics Farming?

Aquaponics farming is usually understood to be the more extensive use of the technique not only in size but also including growing the fish for consumption as well instead of having them just for decoration and plant nutrition purposes.

What Can You Grow with Aquaponics?

In short, you can grow absolutely anything you want with aquaponics as long as you have enough space, nutritional requirements and the appropriate climate.

What does Aquaponics Mean?

It’s simply a name combination of the two systems that serve as its basis – aquaculture and hydroponics – resulting in Aquaponics.

Aquaponics brings healthy, delicious and environmentally-sound food production to anyone’s home, regardless of space, climate or economic situation. Not only is it a fantastic opportunity for businesses but you can also set up your own aquaponics system in your backyard or even in the interior of your home in a few simple steps.

It’s a sure way to always have fresh and nutritious food for you and your family while keeping costs extremely low – or even making a profit – and also helping the environment. Everybody wins!

Get to Know Me 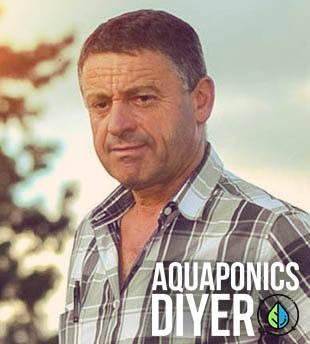